Rhinoplasty, a surgery more popularly known as a “nose job,” can accomplish several things. For instance, it can narrow your nose, improve your nose tip, widen your nose or reduce your nose size. It can also eliminate breathing problems. Local anesthesia is used for sedation during the surgery. In addition, the changes that are made to the nose can typically be done within the course of one three-hour rhinoplasty session; in other words, in the majority of cases, multiple surgeries are not usually needed. Here is what you can expect during and after the rhinoplasty.

After the nose job surgery is done, a splint is usually put on the nose to help protect the nose and reinforce its new post-surgery shape. Also, a nasal pack is sometimes placed into the nose in order to support the nose from the inside. Immediately after the surgery, you will feel tired; however, most likely you will be able to get up and walk around one or two days after the surgery. At that point, any pains or bruising you might be experiencing can be successfully dealt with by keeping your head elevated, taking medication and putting a cold compress over your eyes. Within a few days after surgery, the nasal packs will be removed. Also, the splint on the nose is typically removed within one week after the surgery.

Most individuals are able to return to the workplace within one week to 10 days after surgery. Makeup can typically be used to cover bruises. Granted, you should be careful; avoid hitting your nose for a time span of at least eight weeks. The final result of your rhinoplasty might not be apparent for months. The subtle nose swelling that is present a few weeks after surgery will subside over time.

The results of your nose job will be dramatic and immediate. For instance, if your nose was large before the surgery, after the surgery your nose will be noticeably smaller. If you had a large nose bump before the surgery, the bump will be gone after surgery. The rhinoplasty will enhance and improve the nose you have. After the rhinoplasty, when you look at yourself in the mirror or when others take pictures of you, you will gain a new sense of confidence. After rhinoplasty, since your nose looks different, your face will look different as a whole. Your facial features will be more in harmony with each other; your features will seem more balanced. The final result of your nose job will be an improvement that lasts for the rest of your life.

Whether you live in Jupiter, Vero Beach, Sewall’s Point, or nearby, be sure to contact Dr. Fasano today to set up your consultation or discuss whether a nose job would be right for you.

Email: info@johnfasanomd.com Get Directions or Read Our Reviews 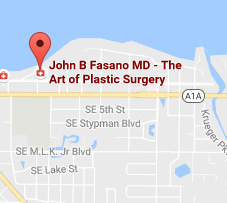